When I received a huge package from my new sponsor Wholesome Sweeteners I was overwhelmed by the sheer number of products they make! And as I started learning how much better they are for you than regular sweeteners and how much better they taste, I began wondering how was I ever going to use so many good products?! My next thought was, I wanted to use as many of them in one recipe as I could! And given the time of year, I knew what I wanted to create – a gluten-free Gingerbread House!!

I wanted to enter my gingerbread house in Kim’s Gluten Free Gingerbread House Contest mainly because I just love her to pieces and wanted to support her but also because I really wanted a chance to win that iPad. (Hint, hint, Santa.) Life being what it is around here these days, I missed the contest deadline but once the idea of creating a gingerbread got into my mind I became obsessed. I started to envision what I wanted – an elegant and understated home with shimmering amber windows, surrounded by mounds of marshmallow snow.

Here’s how I did it:

I drew out a template on heavy art paper then I cut it out including all the openings then I traced the window openings on wax paper a little larger than the windows. I melted Wholesome Sweetener’s Organic Sugar with a little water and their Organic Blue Agave then caramelized it until it became a light amber color and carefully poured it onto the wax paper and refrigerated until firm and cold.

Then I made the dough for the house using Wholesome Sweetener’s Organic Dark Brown Sugar and their Organic Molasses. It is a thick dough. Since I wanted a big house, I made double the recipe for the gingerbread.

I rolled the dough onto parchment paper and cut out the shapes using my template as a guide. After everything was trimmed up I transferred the pieces to flat baking sheets, parchment and all.

After the pieces had baked and cooled I started decorating the house pieces with thick icing made from Wholesome Sweetener’s Organic Powdered Sugar . I used ziplock bags instead of piping bags – it was easier! I dusted the roof pieces with gold dust. After the decorations on the outside of the house had dried, I put a heavy bead of icing around the windows and attached them to the insides of the walls. Then I attached little decorative touches in the windows, using icing as glue. I piped a heavy bead of icing on a piece of card stock to hold the house and assembled it on three sides. I put a set of battery operated lights inside with the power switch outside the house. I attached the final wall, roof and little front porch overhang and I used pieces of white candy canes for the porch columns. Then I made from Wholesome Sweetener’s Organic Blue Agave a marshmallow recipe for the snow. It starts out looking like the picture below in the mixer and in 15 minutes magically turns to white fluffy snow! I protected my tablecloth with more wax paper and spread my marshmallow snow all around. I dusted powdered sugar all over the snow, pine cones and the roof of the house and made sure some landed on the window sills just like snow! And Voila! My Gingerbread house was done! When lit up, it’s all shimmery and golden and I just love it!

The g-kids came over and oohed and ahhed over the house and eyed it hungrily, wanting to know when they could eat it! 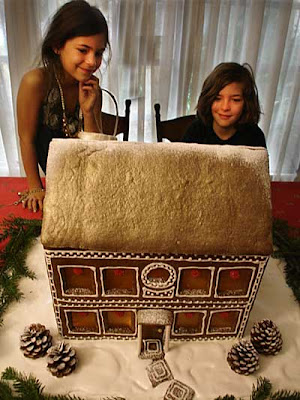 Nutrition facts is calculated for the entire gingerbread house.